Europe’s revamped strategy to beat its two-year sovereign debt crisis won the backing of global finance chiefs, who urged the region’s leaders to deal “decisively” with the turmoil when they meet for emergency talks in a week’s time.
European officials yesterday outlined the initiatives they’re considering at a meeting in Paris of finance ministers and central bankers from the Group of 20 economies. With the continent’s fiscal woes rattling financial markets and threatening the world economy, governments were urged to complete the plan at their Oct. 23 summit in Brussels and to tame the threat of contagion by maximizing the firepower of their 440 billion-euro ($611 billion) bailout fund.
Europe’s strategy, which has still to be made public, currently includes writing down Greek bonds by as much as 50 percent, establishing a backstop for banks and multiplying the strength of the newly-enhanced European Financial Stability Facility, people familiar with the matter said Oct. 14. Optimism the crisis may soon be tamed spurred stocks higher last week and pushed the euro to its biggest gain against the dollar in more than two years.


In the works is a five-point plan foreseeing a solution for Greece, bolstering of the EFSF rescue fund, fresh capital for banks, a new push to boost competitiveness and consideration of European treaty amendments to tighten economic management.

Options include tweaking a July accord struck with investors for a 21 percent net-present-value reduction in Greek debt holdings. One variant would take that reduction up to 50 percent, the people said.
Under a more aggressive proposal, investors would exchange Greek bonds for new debt at a lower face value collateralized by the euro area’s AAA-rated rescue fund, the people said. The ultimate option is a restructuring involving writedowns without collateral, they said.
The bank-aid model under discussion is to set up a European-level backstop capitalized by the rescue fund, the people said. It would have the power to take direct equity stakes in banks and provide guarantees on bank liabilities.
Officials are considering seven ways of multiplying the strength of Europe’s temporary rescue fund. The options break down into two broad categories: enabling it to borrow from theEuropean Central Bank or using it to partly insure new bonds issued by distressed governments. The ECB has all but ruled out the first method, making bond insurance more likely, the people said.

EFSF guarantees of new bonds might range from 20 percent to 30 percent, a person familiar with those deliberations said. Recourse to bond insurance suggests the central bank will need to maintain its secondary-market purchases for an unspecified “interim” period, people said.
對歐洲政府能否澈底解決金融危機還有保留，尤其是解決意大利及西班牙的潛在危機，須更大量的財政資源及承擔；要協調各國的矛盾並不容易。也可參看陶冬博士的觀點： 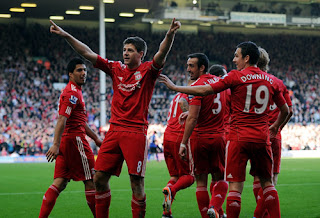 
- China’s National Day holidays, namely the “Golden Week” ran from 1 Oct to 7
Oct 2011. Preliminary data indicates that Golden Week sales for this year were
robust across the board, despite the strong global macro headwinds. According
to the Ministry of Commerce, key retailers nationwide registered retail sales
growth of 17.5%oya for the week. In this report, we summarize the sales details
for major sectors based on the channel checks and observations from our sector
analysts.
- Auto: Mixed picture for China’s auto sales during Golden Week: We found that
the sales picture for car sales is rather mixed, with the luxury cars still
maintaining resilient sales trend yet the medium and low-end cars witnessing
rather weak sales. Two small car dealers told us that their sales volume during
Golden Week went down by 15% and 25% YoY, respectively. By contrast,
luxury car sales continued to do well during Golden Week, with a waiting
period of three to six months for such popular models as BMW 5 series and
BMW X series. One Landrover dealer in Shanghai told us that customers must
pay a 50% deposit and wait for one year for the popular Landrover models.
Alternatively, customers can pay an “urgent fee”, equivalent to 5% of its retail
price to get the vehicles. We maintain the view that the luxury car segment
remains the only bright spot in China autos.
- Consumer: We see no signs of a notable slowdown across the retail sector, and
Golden Week sales growth sustained 1H and Q3’s strong momentum. Luxury
consumption remains robust and is still outrunning overall retail sales growth.
In Hong Kong, mainland Chinese tourists remain the growth powerhouse
whereas local spending growth moderated.
- Macau gaming: Macau gaming saw a strong start in China Golden Week.
Based on revenue achieved in the first 9 days of October (MOP11.7bn), we
expect this month’s gaming revenue to be on track to deliver another 45% y-y
growth (if we assume the rest of the month to deliver the same daily run rate of
September). We continue to favor operators with a stronger mass-market
franchise which is less impacted by overall credit/liquidity conditions. Our top
pick remains Sands China (1928.HK).
- Property: Primary daily average sales volume in the 8 key cities was 1,134
units, down 61%oya. Market sentiment has worsened this year, mainly due to
tight liquidity, increased supply and macro uncertainty. Preliminary sales
performance for larger developers including COLI, Evergrande, and Country
Garden was very good, which indicates that the large developers have taken up
more market share to sustain their growth in a down market.
- Technology: Preliminary data suggests healthy sales figures for handsets and
PCs. TV sales were slightly below. AVC’s initial data suggests 8-9%yoy growth
in unit shipment during Golden Week and Mid-Autumn Holiday.
於 19:25 9 則留言:

Angela Merkel and Nicolas Sarkozy turned their crisis-fighting focus to banks, promising a recapitalization blueprint this month that will overtake a 12- week-old rescue plan that has yet to be put into place.
“We will recapitalize the banks,” the French president said in Berlin yesterday at a joint briefing with the German chancellor without providing details. “We’ll do it in complete agreement with our German friends because the economy needs it, to assure growth and financing.”
Facing rising pressure to defuse turmoil that’s raged for 19 months and growing concern Greece is headed to a default, Merkel said European leaders will do “everything necessary” to ensure that banks have enough capital. Sarkozy said they would deliver a plan by the Nov. 3 Group of 20 summit.
Searching for what each called a “durable” solution for Greece’s debt load shows they have moved beyond a July 21 plan that Luxembourg’s Jean-Claude Juncker called the “final package, of course.” Their approach may spike a debt swap now being negotiated that would impose a 21 percent write-off and suggests investors take a bigger share of the losses, reflecting the deterioration of the Greek economy.
“There is a big difficulty with respect to the Greek situation because it is looking as if the July 21 agreement just isn’t sufficient and that’s been increasingly recognized in Greece and the rest of Europe,” Julian Callow, chief European economist at Barclays Capital in London, said today on Bloomberg Television’s On the Move with Francine Lacqua.
http://www.bloomberg.com/news/2011-10-09/merkel-sarkozy-pledge-bank-recapitalization-in-crisis-plan-due-this-month.html
再加上近日歐洲央行對金融市場的注資行動，歐洲危機的政策轉折點或已出現，但前提是歐債危機不再擴散至西班牙及意大利。